Justices take up gay marriage for the first time 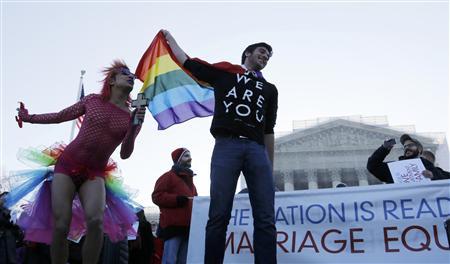 (Reuters) – America’s top court takes up the delicate and divisive issue of gay marriage on Tuesday when the nine Supreme Court justices consider the legality of a California ballot initiative that limits marriage to opposite-sex couples.

Tuesday will be the first of two days of oral arguments on the issue. On Wednesday, the court will consider the 1996 federal Defense of Marriage Act (DOMA), which limits the definition of marriage to opposite-sex couples.

Rulings in both cases are expected by the end of June.

In what is scheduled to be about three hours of deliberations with lawyers over the two days, the justices will have their say on what gay activists see as a key civil rights issue reminiscent of famous Supreme Court cases of the past, including Loving v. Virginia, a 1967 case in which the court invalidated bans on interracial marriage.

The cases come before the high court at a time when more states have legalized gay marriage. Last year three more – Maryland, Maine and Washington – did so, bringing the total to nine plus the District of Columbia.

“Never before in our history has a major civil rights issue landed on the doorstep of the Supreme Court with this wave of public support,” said Theodore Boutrous, a lawyer for opponents of the California initiative, which is known as Proposition 8.

Advocates for both sides plan to demonstrate outside the multi-columned Washington courthouse. Those who plan to attend include Chief Justice John Roberts’ cousin Jean Podrasky, a lesbian from California who would like to marry her partner.