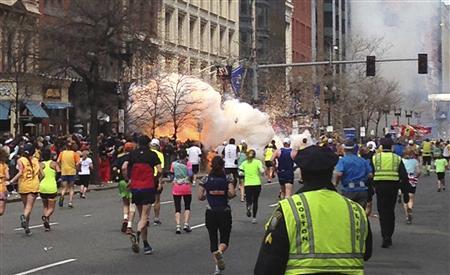 (Reuters) – A Boston-area apartment was one focus of a wide-ranging police investigation on Tuesday as authorities pursued clues into who carried out a bombing attack that killed three people and wounded more than 100 others at the storied Boston Marathon.

Police overnight searched an apartment in Revere, about 6 miles northeast of Boston, that was the residence of a person whose connection to the event is under investigation, law enforcement sources said.

A stretch of Boylston Street near the race’s finish line and the blocks around it were closed to traffic as police searched for evidence of the identity of who placed the bombs packed with ball bearings to maximize casualties.

It was the worst bombing on U.S. soil since security was tightened after the attacks of September 11, 2001…

White House officials and investigators said it was too early to say whether the Boston attacks were carried out by a foreign or homegrown group, or to identify a motive.

Hospitals in the Boston area were planning surgeries for some of the victims, many of whom sustained lower leg injuries in the blasts, said Peter Fagenholz, a trauma surgeon at Massachusetts General Hospital.

“We’re seeing a lot of shrapnel injuries” from small metal debris, Fagenholz told reporters outside the hospital. Doctors treated 29 people, of whom eight were in a critical condition.

An 8-year-old boy was among the dead, the Boston Globe reported, citing two law enforcement sources briefed on the investigation. A 2-year-old was being treated at Boston Children’s Hospital for a head wound, the hospital said.