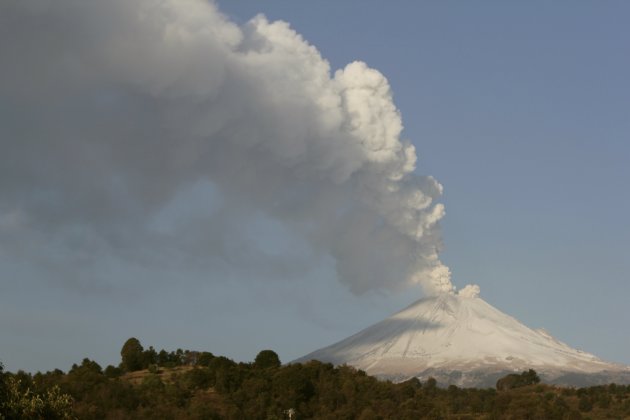 CENAPRED has raised the alert status of Popocatépetl to the third highest level (5 out of 7) and considers the possibility of a major eruption. The volcano continues to have elevated levels of seismicity, and produces frequent steam and ash emissions raising about 1 km above the crater.
Local authorities are preparing for potential evacuations. The last time evacuations were ordered on a large scale was in 2000 when over 50,000 people had to leave their homes.
The major hazards of a larger eruption would be ash falls, pyroclastic flows, lahars produced by mixing of water and tephra.
A larger eruption is likely to affect air traffic around Mexico City as well.

Popocatepetl is one of Mexico’s most active volcanoes. After almost 50 years of dormancy, “Popo” came back to life in 1994 and has since then been producing powerful explosions at irregular intervals.
In the past centuries befor European invasions, large eruptions produced giant mud flows that have buried Atzteque settlements, even entire pyramids.

Volcán Popocatépetl, whose name is the Aztec word for smoking mountain, towers to 5426 m 70 km SE of Mexico City to form North America’s 2nd-highest volcano. The glacier-clad stratovolcano contains a steep-walled, 250-450 m deep crater. The generally symmetrical volcano is modified by the sharp-peaked Ventorrillo on the NW, a remnant of an earlier volcano.
At least three previous major cones were destroyed by gravitational failure during the Pleistocene, producing massive debris-avalanche deposits covering broad areas south of the volcano. The modern volcano was constructed to the south of the late-Pleistocene to Holocene El Fraile cone. Three major plinian eruptions, the most recent of which took place about 800 AD, have occurred from Popocatépetl since the mid Holocene, accompanied by pyroclastic flows and voluminous lahars that swept basins below the volcano. Frequent historical eruptions, first recorded in Aztec codices, have occurred since precolumbian time.