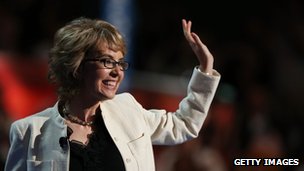 A former US congresswoman who survived a gunshot wound to her head during a mass shooting has launched a campaign against gun violence.

It comes as the White House holds talks with groups representing gun-owners, victims and the video game industry.

A school shooting in December that killed 20 children and six adults has fuelled debate over gun violence.

Ms Giffords wrote, with her husband, former astronaut Mark Kelly, in USA Today on Tuesday: “In response to a horrific series of shootings… Congress has done something quite extraordinary – nothing at all.”

The couple also highlight the influence of the gun lobby, adding: “Achieving reforms to reduce gun violence and prevent mass shootings will mean matching gun lobbyists in their reach and resources.”