Scientists have unlocked key parts of the complex genetic code of wheat, one of the world’s most important crops, which could help improve food security.

The team hopes the data will accelerate the development of varieties more resilient to stresses, such as disease and drought, that cause crops to fail.

The 2012 wheat harvest was hit by extreme weather events around the globe, causing a sharp rise in prices.

Details of the findings have been published in the journal Nature. 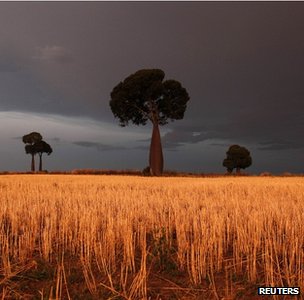 In 2011, the global output of 681 million tonnes made bread wheat the third most-produced food crop (behind maize and rice) and accounted for about 20% of the calories consumed by the world’s population.

The study – involving UK, US and German scientists – has built on the 2010 publication of the draft genome, resulting in the development of tools that can decipher the genetic code of segments of the genome.

The researchers hope the information could help breeders produce varieties that are better suited to cope with future threats to production yields.