UN: ‘More should be done’ to prevent bio-terrorism 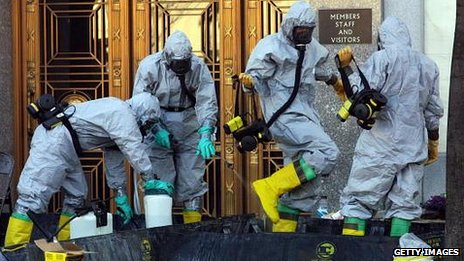 The United Nations says great efforts need to be taken to prevent cases of biological terrorism.

A UN official delivered the warning at the BioDesign Forum on synthetic biology being held in the UK.

Piers Millet from the UN’s Biological Weapons Convention said there was no global organisation to ensure biotech was not used for “nefarious” purposes.

But international bodies did exist to watch out for nuclear and chemical weapons, he told the Cambridge meeting.

“If you look at the history of the last century we see a very clear trend – every time we make a major step forward in our understanding of biology, we find a weapons application for it,” he said.

He listed several major cases of biological attacks in the past few decades, such as the doomsday Aum Shinrikyo cult spraying anthrax spores from the roof of an eight-storey building in Tokyo, Japan, in 1993.

The city was subjected to another attack from the same religious group two years later, when sarin gas was released on the Tokyo subway system, causing 12 deaths.

Biological weapons were used as early as the 18th Century, when Britain infected tribes of Native Americans with smallpox.

More recently, said Mr Millet, there had been instances of biological weapons in World War II and during the Gulf War in 1991 in Iraq.

“The traditional approach of the international community to dealing with weapons is this – they recognise a threat, develop a treaty, and then they turn that treaty into some operational form, normally by trying to control technology associated with it,” he said.

“It has very strong models in nuclear and chemical spheres – but not in regards to synthetic biology.”