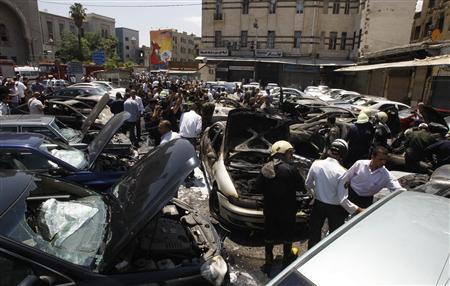 There was a loud explosion and a column of black smoke rose over Damascus, an Assad stronghold that until the last few days had seemed largely beyond the reach of rebels. State television described it as a “terrorist” blast.

Dozens of wrecked and burning cars were strewn over a car park used by lawyers and judges. State news agency SANA said three people were wounded by the bomb hidden in one of the cars.

The guerrilla attack in Damascus coincided with a Turkish military buildup on its border to the north and a growing sense of urgency in Western- and Arab-backed diplomatic efforts to forge a unity government and end 16 months of bloodshed.

Turkish military convoys moved slowly towards the Syrian frontier, reacting to Syria’s shooting down of a Turkish warplane over the Mediterranean on Friday. A Turkish official said they were reinforcing air defenses.

He gave no details, but this could cover Syrian forces pursuing rebels towards the border, or patrolling helicopters or warplanes. Syria said at the weekend that it had killed several “terrorists” infiltrating from Turkey.

A first substantial convoy of about 30 military vehicles, including trucks loaded with anti-aircraft missile batteries dispatched from Turkey’s coastal town of Iskenderun, was moving slowly towards the Syrian border 50 km (30 miles) away.